Head of Coingaming Group CIS, “The Community and Our Company Invested Money and Now Bitcoin’s Logo Can Be Found on Sleeves of the Watford FC’s Uniform”

Head of Coingaming Group CIS, “The Community and Our Company Invested Money and Now Bitcoin’s Logo Can Be Found on Sleeves of the Watford FC’s Uniform”

Held in Tbilisi on October 18, Georgia iGaming Affiliate Conference gathered many representatives of keynote gambling companies that work throughout the world. We met the head of Coingaming Group in the CIS region Dmitry among the guests of the event.

In the interview for Georgia iGaming Affiliate Conference, he told us about such popular brands of the company as bitcasino.io cryptocurrency casino and sportsbet.io sportsbook, as well as specifics of their operation and development. Besides, Dmitry shared the experience of Bitcoin promotion through football and the role that partnership with the participant of the English Premier League Watford FC played.

GiAC: Bitcasino.io is one of your first brands. How has the first licensed Bitcoin casino been developing? What have you managed to achieve over the past years?

Dmitry: Indeed, Coingaming Group was truly born together with our first brand bitcasino.io. Initially, in 2014, this online casino accepted deposits and paid out winnings solely in Bitcoins. With time, we added several other cryptocurrencies as well as fiat payment systems that simplified the play for local users.

However, even now we have more cryptocurrency payments than fiat ones in our casino. Two years later, we launched sportsbet.io brand, a bookmaker that currently also works with four leading cryptocurrencies. We have an international license that favorably distinguishes us from small, unlicensed brands.

Speaking of the company’s achievements, Coingaming entered the list of 50 world’s largest and most influential gambling companies according to the international magazine eGaming Review in 2018.

GiAC: Coingaming Group's sportsbook sportsbet.io became a key partner of the participant of the English Premier League Watford FC. You promote cryptocurrencies and Bitcoin, among other things, through football. Tell us more about this experience.

Dmitry: All brands of Coingaming Group focus on cryptocurrencies. It harmonizes with our motto “Joyfully. Quickly. Fairly”. We want our players to have the possibility to have fun with a maximum of anonymity (meaning without the interference of banks and the state). Blockchain allows doing it quickly and transparently, which is very fairly.

However, such technologies stay niche – almost everyone has heard about them but quite a few people know them well. Besides, there are certain biases related to cryptocurrencies. The sponsorship of such a famous club as Watford implies that we are a serious and long-term company, that brands of the global level associate themselves with cryptocurrency bookmakers, and that Bitcoin is becoming a mainstream means of settlements.

Moreover, not only we became partners with Watford FC and the logo of sportsbet.io can be seen at the center of players’ T-shirts, but we also initiated the promotion of Bitcoin through football. The community and our company invested money and now Bitcoin’s logo can be found on sleeves of the club’s uniform. The alliance of Bitcoin, our popular bookmaker, and top English football club is a serious message saying that the entertainment industry and the use of cryptocurrencies there are getting mainstream. 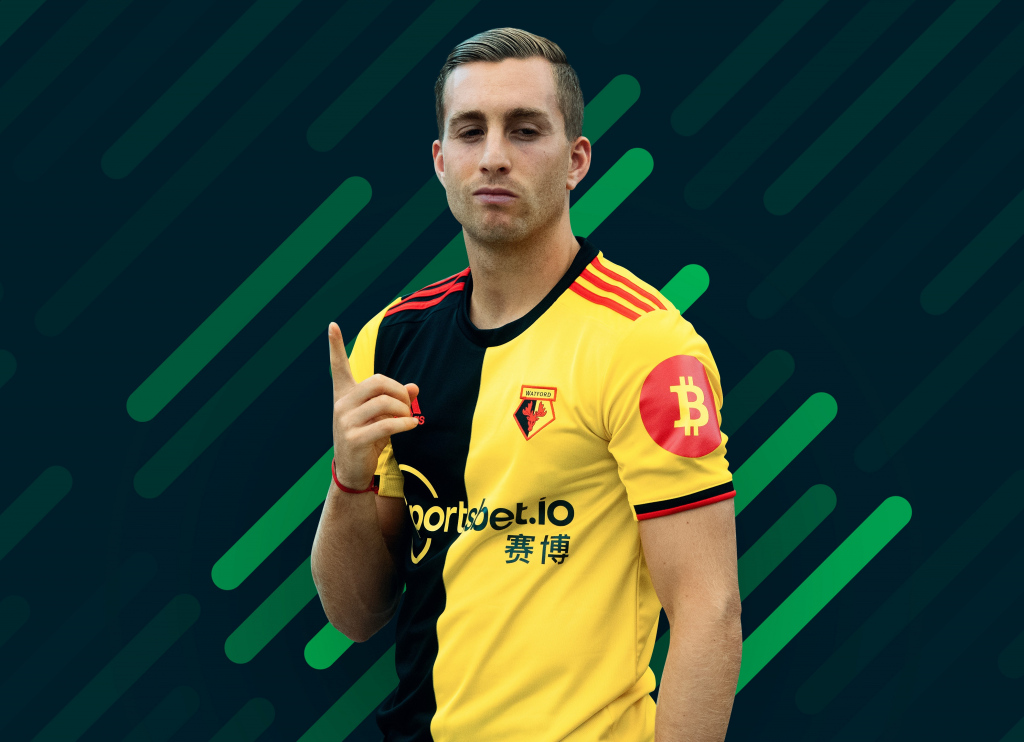 GiAC: Is there any feedback from football fans? How do they respond to promotional offers, casino games of Watford FC, and other events organized by the sportsbook together with the FC?

Dmitry: Thanks to the creation of a full-fledged entertainment ecosystem using cryptocurrencies, the collaboration with Watford FC led to the development of standalone games dedicated to football. We can see that football fans not only place bets on their favorite teams but also actively play football-themed casino games and participate in promotional offers. We drew exclusive players’ T-shirts, tours to Watford FC games in the UK, and cash prizes.

Football fans that have not tried to play, deposit, and withdraw winnings using Bitcoin before (or another cryptocurrency that we use) shared their impressions with us, saying that it is very simple and fast. Withdrawal of winnings can take just a minute.

Our partners that host football and review websites note how easy and beneficial it is to work with Bitcoin payments.

We are preparing many interesting special offers as well as innovative changes in our sportsbook – already now users can play poker through the platform but this is just the beginning of our rapid development.

To learn more about how the event passed, read the post release
material about Georgia iGaming Affiliate Conference ►►►

Georgia Gambling Conference Dedicated to the Development of Gambling Busines...

Betting Shop Launch and Promotion: Tips for Beginners
Get the guide about marketing and legislative regulation: “What you need to know to launch on the European market”.